The Music Business Is Holding a ‘Blackout.’ But No One Seems to Know What That Means

The industry-wide call to action, which asks for a day of “pause” on June 2nd, has garnered both support and skepticism from record labels and artists 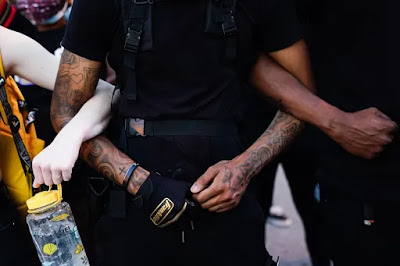 As protesters and industries react to the killing of George Floyd and other black victims of police brutality, artists, executives, and companies from across the music business will participate in a day of silent protest on Tuesday — though a lack of clear messaging from the major labels makes its meaning open for interpretation.
Organizers of the planned June 2nd event asked the industry to “not conduct business as usual” and instead spend time reflecting on how to support the black community. The original statement was posted toward the end of last week and quickly gained momentum over the weekend. By the end of the weekend, the three music majors Warner Music Group, Sony Music, and Universal Music Group, had all pledged support alongside many of their flagship labels, though others in the industry expressed confusion at the message’s intent.
“Your black executives, artists, managers, staff, colleagues are drained, traumatized, hurt, scared, and angry,” Jamila Thomas, senior director of marketing at Atlantic Records, wrote in a statement to music-industry colleagues on Instagram on Friday, co-launching a hashtag called #TheShowMustBePaused and labeling the day Blackout Tuesday.
Thomas and her partner in the initiative, former Atlantic Records employee Brianna Agyemang, made a formal call to action, asking those who work in music, entertainment, and show businesses to “pause” on Tuesday because “the show can’t just go on, as our people are being hunted and killed.”
“#Theshowmustbepaused is an initiative created by two black women in music in observance of the long-standing racism and inequality that exist from the boardroom to the boulevard,” the duo wrote. “Our mission is to hold the industry at large, including major corporations and their partners who benefit from the efforts, struggles, and successes of black people accountable. To that end, it is the obligation of these entities to protect and empower the black communities that have made them disproportionately wealthy in ways that are measurable and transparent.”
“I don’t want to sit on your Zoom calls talking about the black artists who are making you so much money, if you fail to address what’s happening to black people right now,” Thomas wrote. “That’s the only ‘rollout plan’ I want to discuss. And it’s not solely on the ‘urban department,’ Black label heads, Black Presidents, & Black employees to navigate. Your silence is noted.”
Columbia Records was one of the first labels to publicly issue a statement independent of Thomas and Agyemang’s initiative. “We stand together with the Black community against all forms of racism, bigotry, and violence,” the label wrote. “Now, more than ever we must raise our voices to speak up and challenge the injustices all around us.”
A flurry of social media posts from record labels and other industry employees soon followed. Some labels advised specific actions. Interscope announced that the company would “contribute” to organizations that are focused on bailing out protesters “exercising their right to peacefully assemble” and aiding lawyers in the fight for judicial changes, and that it would help nonprofits working toward “economic empowerment in the Black community.” (A rep for Universal Music Group, Interscope’s parent company, did not reply to a request for comment or clarification on how much the label would contribute.) Interscope, which promised to not release any new music during the week of June 1st, also suggested that its followers text “FLOYD” to 55156 to voice opinions against police violence and/or donate to the Minnesota Freedom Fund, as well as look into Color of Change, Winning Justice, and the ACLU.
Labels: free music download